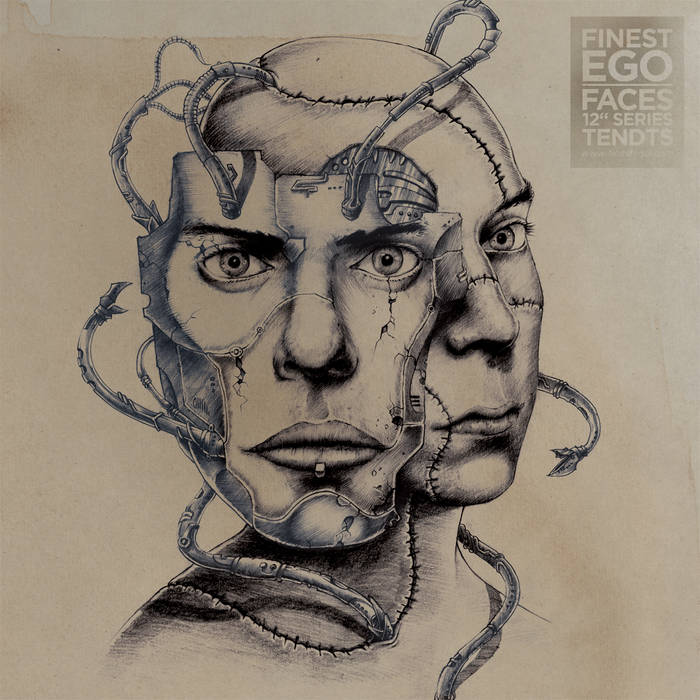 Project: Mooncircle & Finest Ego have teamed up to establish a fresh new 12” producer series, entitled “Faces”. On every edition, you will find two different producers. Respectively, each producer will have their own record-side and unique cover artwork by the aspiring Bioniq, known for his surrealistic portraits, blending humans and elements of technology.

The fifth edition of our “Faces“ series comes with double the amount of producers as usually. One side we find Greek brothers and production duo Tendts while the other side is shared by the two young artists Daixie and Hanami, from Australia and the UK respectively.

- gnothi seauton | nosce the ipsum –
The oldest masks are more than 9000 years old and have been a part of earliest ritual ceremonies.
A mask disguises our true emotion and can also give the impression of fake feelings or make us appear emotionless. Strangely contrasted like the painted face of a clown, we appear sad and happy simultaneously. Moods and temper change rapidly, while there is nothing visible on the outside. We reflect ourselves in the image of others, project our ambitions and wishes but also fears into them, caring more about our perception by others until we don’t recognize our own image in the mirror anymore, instead of focusing on self-awareness and knowledge of self.

Where is the thin line between the truth and a lie? Do we all wear invisible masks during our everyday life? A story fractured into million pieces of a puzzle, waiting to be put back together.

If you were an idea, would you be a static one? An idea that never changes ?
An idea that tends to become something else ? An idea that becomes an obsession?
An idea can be an object, can be a sentence or just one word.
“Tendts“. What kind of word is that ? Could it be two words merged into one ? Or was it one from the beginning ? Let’s just say that the idea behind the word came up when two people were writing music in a room. In this particular room the only window that had a view of the outside world was always blocked by a rusty, dusty tent. Was this annoying tent worth becoming their artistic totem ? Maybe. But the one thing sure needed was a change. They had to transform the word into something else. They had to add something else. One letter.
Tent. Tend. TENDTS.

Hertfordshire based producer ‘Hanami‘ is set to stir things up in the coming months for the UK electronic music scene.
Now moving away from his days of working in a live electro band, Ryan Newton has decided to embark on an ambitious solo project. A direction that he has been meaning to pursue for some time. Whilst still keeping the use of sampled instruments and drum sequencers he is looking to bring a new lease of life to the increasingly generic sounds the scene continues to produce as the music becomes more popular.

Only 19 years of age and only producing for seven months now, Alex Xie, alias Daixie, is a young producer from Australia with a Chinese and Cambodian background. While drawing influences from many artists, his main inspiration comes from nature and his everyday personal interactions. His music, based heavily on field recordings, is a way of expressing his emotions – something that he has trouble doing in his day to day life. It is his release which allows him to feel more deeply about things he can not express by other means.

Bioniq is an artwork designer, DJ and producer from St. Petersburg in cold Russia and Project: Mooncircle’s special KGB agent. With his drawings he aims to create new horizons on paper and draws inspiration from historic tales, events of the present age but also possibilities the future might hold.
Limited 12” vinyl for serious collectors, DJ’s and record addicts only!